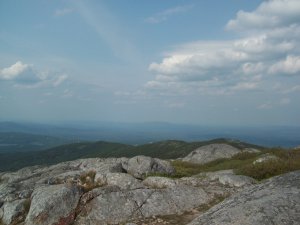 Well……I conquered Mount Monadnock. They estimate that it takes about 4 hours to climb round trip. We did it in less, including a small picnic snack at the top and taking a longer route down, so I feel a bit like a rock star. Except that I had to stop every 10-20 minutes on the way up to catch my breath. A minor detail, right? We took the ‘White Dot’ trail up, which is the most direct route, then the ‘Red Spot’ trail down, which takes you hiking across the top of the mountain and down a different side, where you eventually take a trail leading back over to the White Dot. There are some amazing views, and the scenery is gorgeous.

Next on the list is Mount Greylock, which is the highest peak in Massachusetts at just under 3,500 feet. And the new goal for the end of the summer is Mount Washington in New Hampshire, which is almost 6,300 feet.

The best part about climbing a mountain is the celebratory feasting for the rest of the weekend. Or maybe that’s just my opinion? The worst part is the guilt I feel when I come home to my dogs after leaving them alone all day. Not that the spoiled pups don’t get reparation in every form possible. Lately, they’ve been pre-occupied with the sudden surge in the rabbit population around the house. They’re quite certain that it’s their duty to try and narrow the numbers. Having had pet rabbits for a while as a child, I know that their teeth, and surprisingly their claws, make them much more formidable foes than their cuddly appearance would lead one to believe.

Two different dogs means two different hunting tactics, of course. My Jack Russell, Tempest, is a silent assassin, who will stalk and ultimately pounce on her prey (even when it’s my other dog) without making a sound. Sullivan, however, is a Schnauzer mix with a war cry that could rival that of any warrior princess. His high pitched shrieking let’s every creature within hearing distance know that he’s either A) seen another creature that moves or B) is being tortured and abused in the worst possible way. Both are rescues, and have their quirks, but are wonderful little pups that I’m happy to spoil rotten.

So, weather permitting, I will makes the pups ever so comfortable on the couch, with their pillows and blankets, surrounded by their toys, while I go climb Mount Greylock this weekend. After another long week at work, where the minutes seem like hours and the hours seem like days, I’m really looking forward to it.