I went to Maine a while ago, and stumbled upon a neat little place I’d like to share – The International Museum of Cryptozoology. Cryptozoology is considered a pseudoscience by many, and involves the search for animals whose existence has yet to be proven and/or accepted by the scientific community as real. Some consider cryptozoologists to be monster hunters. A bit of merit was earned after a coelacanth, a prehistoric fish thought to be extinct for over 65 million years, was discovered living in modern times. Whether you believe in the existence of Yeti and Nessie and other such creatures or not, it’s still a fun and interesting place to go look around. You’re also free to take pictures with the collections.

For $7 ($5 for kids) you gain entrance to the museum, which is a little hole in the wall off Avon Street in Portland. We were fortunate enough to visit when Mr. Loren Coleman, the director and founder of the museum, was there. Mr. Coleman is a true believer, cryptozoologist and investigator, who you may recognize from his numerous appearances in different documentaries and investigative TV series. He’s also a very nice, hospitable man who is eager to discuss the exhibits with both believers and non-believers. 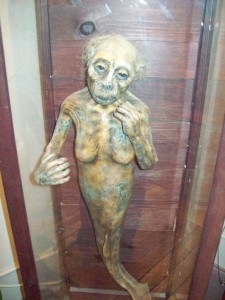 It’s a fun little side trip should you find yourself in the area, and the one and only museum of its kind in the world.

4 thoughts on “Yeti and Nessie and Monsters, Oh My!”