This weekend the sky was grey and streaked with angry clouds. It was cold, windy and rainy. Not the type of weather you want to be outside in, but after a week at work, spending the day inside makes me feel like I’m going to climb the walls. So that’s exactly what I did!

I went to the Central Rock Gym that opened this past summer in Watertown, MA. Last winter I logged a lot of hours at the Central Rock in Worcester, but the Watertown gym is closer and the walls are higher – up to fifty feet! New building, new equipment, new climbs – what’s to lose? The rock climbing gym is a lot different from climbing rocks on mountains outdoors. (Unless you do the whole Cliffhanger thing, but after you’ve seen the opening scene of the movie, why would you?) It’s an incredible whole body workout, and you can rent all the equipment you need so you don’t have to invest in any purchases until you decide whether you like it or not.

The first thing I’d like to say about rock climbing gyms is that they smell like feet. Just a warning to anyone who hasn’t been to a rock climbing gym before but would like to give it a try – brace yourself when you walk through the door. Even a new rock climbing  gym, even in the cold, can knock you over with the smell of feet. (Just being honest.) You get used to it quickly, though, and shouldn’t let it stop you from giving it a try. Rock climbing shoes are uncomfortable to just stand in, and a lot of people take them off whenever they’re not climbing. The padded floors tend to pick up the odor and hold onto it like the last piece of Halloween candy, so be forewarned.

As long as you’re careful and know what you’re doing, it’s relatively safe. Most gyms offer introductory classes every couple of hours on the weekends. You have to trust your belayer – the person on the ground who takes up the slack in the rope and keeps the line locked so if you slip and fall, you don’t go far. The pulley system used is great; you can safely belay for someone well over a hundred pounds more than yourself. 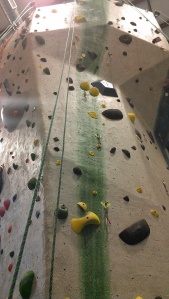 The harness isn’t the most comfortable contraption, but it’s a necessary evil. One you slip and swing for a bit 40 feet up in the air you’ll appreciate it. It provides a sense of security and comfort. And after your first slip or two you’ll find that it’s not as scary as you’d imagine. Just watch the wall, get back on it, and keep climbing. Or not. If you want down, you just let your belayer know, and use your feet to propel and protect you as you jump down the wall.

It’s a great way to spend a day inside. It’s not all upper body strength like you might think – your arms and back will get worked, but a great deal of climbing involves strategizing your way up in your mind and using your legs. While climbing, I’ve been next to five year olds and people well into their golden years. (I don’t wan to be rude and speculate about age, but I’m pretty sure I’ve seen an octogenarian or two!) So give it a try sometime!

4 thoughts on “Climbing the Walls”