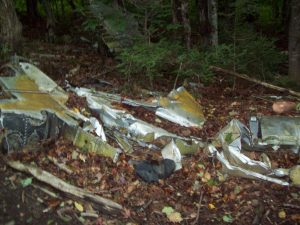 At first glance, upon entering the woods, it looks like trash has been strewn about. It is only after a closer look that it becomes apparent that the refuse isn’t normal trash. It consists of metal, twisted and tortured into shreds, shards and chunks. Pieces hang from trees. A wheel appears tossed haphazardly on its side, decorated with small American flags. Larger panels lean against trees or rest on the ground, and it hits – this is a plane crash. 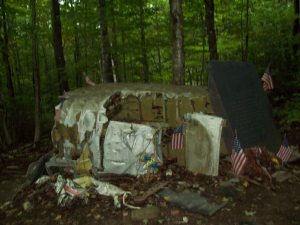 It’s not nice and neat like on TV. There is no body of a plane with a snubbed nose and a broken wing leaning at an angle so you know something is wrong. This is real and it is raw. It’s messy and chaotic. This uncontained wreckage sprawls throughout the woods across the side of the mountain. Little trails snake off, leading to another piece of the rubble, flung far from the main path.

Visitors drive across miles of rutted dirt road to pay their respects. They leave the comfort of their cars to enter the dark woods, to walk among the ruins and remember those that lost their lives. This wasn’t an act of war, but it is a war memorial, a tribute to all those who make the sacrifice to serve in the armed forces. 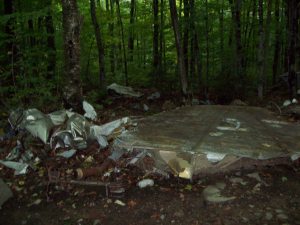 A crew of 9 set out on a routine training flight on January 24, 1963. Due to a structural failure, the B-52 crashed that same day on the side of Elephant Mountain, just outside of the city of Greenville, Maine in Beaver Cove. Looking at the wreckage, it seems amazing that anyone made it through the crash alive, but two survived. The pilot was ejected and spent the night hanging 30 feet up in a tree. The navigator was also ejected, but his parachute never deployed. He landed in the snow with a force estimated at 16 times the force of gravity. After over 20 hours in temperatures that dipped as low as -30degree Fahrenheit, the two survivors were reached and airlifted to a hospital. 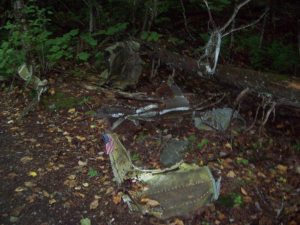 One thought on “Wreckage in the Woods”