I recently went for a solo hike. Solo meaning, I get to do everything my way, which may or may not be a good thing. So I loaded my pack with water, a week’s worth of food, a print-out of the manuscript of my second novel, and the book I’m currently reading (for my lunch break). It made for a heavy load, but I wasn’t planning on conquering any 4000 footers so I figured I could handle it.

My goal for the day was to find a nice, quiet spot and to work on my edits without puppy distractions or internet access. I drove down the road to Echo Lake State Park. I’d never been there before, but had heard it was a beautiful spot. The rumors were true. It was absolutely gorgeous. The beach was also cram-packed full of visitors, all screaming for a dozen different reasons – they don’t call it Echo Lake for no reason. So I hiked around the lake to catch the trail for White Horse Ledge.  I had hiked the nearby Cathedral Ledge before, and I figured it would be much quieter if I climbed to the top and admired the lake while I worked from above. 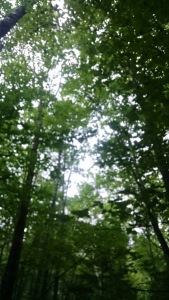 Entering the forest was like entering an enchanted wooded cathedral, with bird song filling the air and a pressing solitude so until the circus I had left just moments before. I had a map, and found my way to the trail that looped around White Horse. It wasn’t well maintained – very narrow in areas, in other places marked only by leaves that were slightly crushed. Then there were an abundance of blazes painted on the trees – until the trail markers stopped at the bottom of a huge cliff. I spent a half hour hiking in every direction, looking for a trail or a marker, attempting to make my own trail, knee deep in dead leaves trying to not think about ticks as I pulled myself up around each side of the rock face until it became apparent that 1) I must not be on the loop trail and 2) blazing your own way may not be the best idea when hiking alone.

So I decided to return to the lake, eat lunch and rethink my plan. On the way back, I spotted many trail markers that did not mark the path I was on. It looked like someone had taken blue paint and just randomly marked trees for kicks. I’ve been on a trail where I’ve suspected this before, so I followed my own prints back to the well marked main trail. I then ate my lunch in the company of frogs.

I couldn’t have been more pleased. The shallow waters of the lake were rife with tadpoles, and hundreds of little baby frogs the size of pinky nails were leaping across the sandy shore in herds like impala on the serengeti. One big bullfrog soaked itself just offshore, keeping watch. Had I been younger . . . who am I kidding, if I had had a proper container to put them in, I would have collected some to study and then brought them home and made a frog sanctuary in my yard. Don’t judge me. 😛

I tried getting some work done, but between sprinkling rain showers and the echoed noise from across the lake, I gave up on my plan and moved on to a new spot for the day. Turns out that White Horse Ledge is a popular area to rock climb – with crampons and ropes and tools which I prefer to only use in a rock climbing gym. But the view is amazing and it sounded like the people in the water were having a blast, so I’d recommend Echo Lake as a nice place to play.