In the spirit of adventure, I like to seize every opportunity available to me to try new things. New places, new experiences, new foods . . . which has occasionally resulted in me putting some strange things in my mouth. I really like snails. Crickets are there for a second, then they’re gone. There are far more normal, mainstream things I’d rather avoid eating, like mayonnaise (strange aversion to it) and Shepard’s pie.

So while at a store in Portsmouth called McKinnon’s, a store that considers itself to be the premiere butcher shop in all of New Hampshire, imagine my reaction when I saw frog legs in their frozen food aisle. I had to try them. I just couldn’t help myself. I put them in the cart (along with a few other ‘delicacies’), paid, and brought them home. 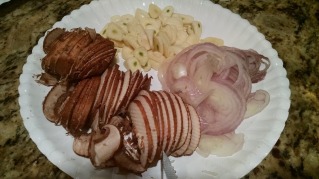 Now, I’ve never cooked something like frog legs before. I actually prefer my exotic foods to be prepared for me. And if you look, there really aren’t that many recipes for frog legs on the internet. So I read the few recipes I did find, came up with a plan, and thawed the legs out. I then soaked the legs in beer for an hour. Why? Soaking can both tenderize and flavor meat. I always give duck an ice-water bath before I cook it to lessen the gaminess.

I seasoned some flour, dredged the legs in it, and sauteed them in a cast iron skillet using a mix of olive oil and butter until they were lightly browned. I removed them from the pan, added garlic, shallots, mushrooms and some white 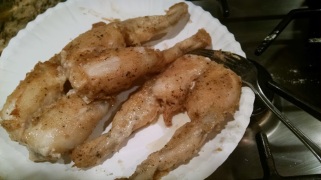 wine, and sauteed until the shallots were cooked. Then I returned the frog legs to the pan, covered it with tinfoil and placed it in the over for twenty minutes at 300 degrees.

The verdict? Not bad. My husband said he liked it, but I thought that they didn’t really taste like anything at all. The meat fell off the bones, which was a bonus, because who wants to be able to say that they stuck a frog’s foot in their mouth and sucked on it’s toes? (Okay, I may or may not have done that very thing just to be able to say it – you’ll never know for sure.) The good news is that I’ve added another food source to my list of low demand food items that I can eat to survive on in case of an emergency (the economy totally collapses leaving the country in a state of dire famine, rampant diseases necessitating an avoidance of public places, terrorism, zombie apocalypse – I won’t starve.)

What strange foods have you tried?