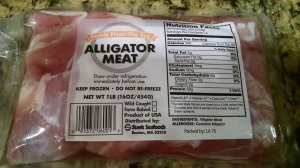 In keeping with my foray into culinary adventures, I cooked gator for dinner the other night. I had eaten gator before, I had just never cooked it. With a recent victory under my belt (I wouldn’t call the frog legs I cooked a smashing success, but they were a success none-the-less, with a pleasant taste and no one got sick) I was feeling brave. I figured

since I had mastered the art of cooking amphibians, I should give reptiles a try. The same store that sold the frog legs, McKinnon’s in Portsmouth, NH, also sold alligator meat, so I bought some and gave it a try.

There were slightly more recipes for gator than frog legs. Like usual, I took what I liked the best from each recipe and made it my own. After cutting the meat into nugget-sized chunks, I soaked it in a mix of milk and hot wing sauce for several hours. I made a beer batter by mixing equal parts beer with flour. I used Shipyard GingerBreadHead, which is seasonal and may also be regional, but made the BEST beer batter that I have ever tasted. (It also made a tasty cooking cocktail with a shot of vanilla vodka in it and a cinnamon-sugar rim.) 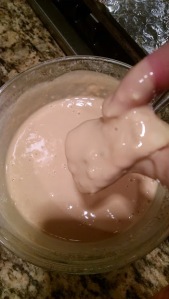 I seasoned flour with Old Bay, Nature’s Seasoning, salt and pepper. I used Grapeseed Oil for frying because one of the recipes I read named it and I had some that had been sitting unused in my pantry for forever and this seemed an ideal way to get rid of it. Working in batches, I dredged the gator in the flour mixture, dunked it in the beer batter, and fried it in the oil over medium high heat, turning to brown all sides nicely. I have to say that it came out really good, the best gator I’ve ever eaten. I won’t hesitate to cook gator in the future.

I also made a cheddar/mustard/beer dipping sauce to go with the fried gator, which was a big hit. It was a little bland, because on this I more or less did follow a recipe. Next time (and I will definitely make this sauce again) I’m going to try adding a bit of Worcestershire, maybe a touch of Tabasco and a pinch of garlic salt.

5 thoughts on “Gator on the Dinner Plate”