I don’t claim to be an engineer, an architect, or even a contractor. To be honest, I don’t entirely know what I’m doing when it comes to construction. My skills can be described as so-so at best. And my body (the saw marks on my arm, the nail blackened by a hammer blow, various cuts, scrapes and bruises from statistically unlikely mishaps, of which I am the queen) attests to this. But, what what I lack in talent I make up for with enthusiasm and ingenuity. And cheap (mostly free) materials.

The body of the bar is made of free wood pallets. The frame for the roof and the wood for the bar top came from the wood pile at the transfer station (or dump, as it’s called in the south). To spruce it up, I bought one $25 6 foot by 8 foot roll of bamboo fencing from the hardware store (FYI – it’s not quite 8 ft long). I cut it using garden clippers into two halves, one 3.5 feet, the other 2.5 feet. I wrapped the taller section around the bottom, cut the shorter section into two halves and used it for the roof, attaching with a staple gun. 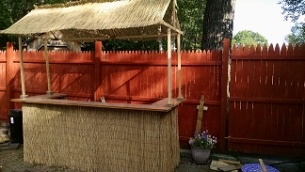 I bought the cheapest laminate floor tiles (12 at 88 cents each) for the bar top. To attach the roof, I built boxes for the upright wood pieces, screwed them to the bar top, and screwed up from under the bar top into the wood rod. I cut notches into the top of the rod for the frame of the roof to fit into so that I could lift the roof off and store it when the snow comes. I spent less than $10 on new wood, buying only two 2 x 2 x 8 which I sawed in half and used at the upright rods holding the roof up, for a total investment of under $50. Which leaves money for the most important part of any tiki bar:

(FYI – these awesome plastic tiki cups came from the $ store!)