About a month ago I made a new friend. It was an inquisitive, furry little creature that moved in with the chipmunks under my porch. After a quick internet search, I confirmed that it was a groundhog and gave him (or her) what may be the most imaginative name ever for a groundhog, Bill Murray.

Having no prior experience with groundhogs, this is complete conjecture, but I think Bill Murray may be cooler than the average groundhog. Bill thought nothing of coming up on the front stoop and looking inside the house. Or hanging out in my flowers. Or the dog pen (which wasn’t the best idea on Bill’s part). 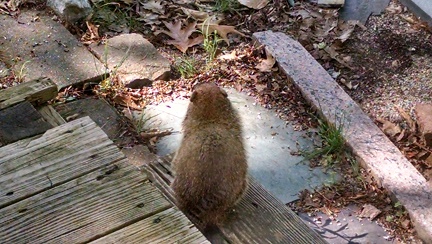 Every day, I’d give Bill my apple core. He helped himself to lettuce and strawberries from my garden. I didn’t mind, because I’d grown way more lettuce than my husband and I could eat, and I’d rather share with Bill than risk it going to waste. And Bill left all the rest of the vegetable alone. So ours was a symbiotic friendship.

Alas, it could not last.

Because Bill started chewing on the house, eating the wood trim away to make the holes he had dug in the ground bigger. Keeping up with an old farm house is hard enough without a saboteur in my midst. So the decision was made. Bill had to go. 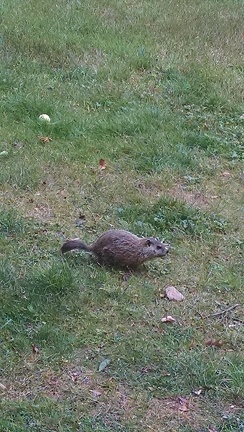 I bought a live trap at the local farmer’s union. Despite the betrayal, this wasn’t a Fredo from Godfather moment. I didn’t want anything bad to happen to Bill. I just didn’t want him to destroy my house.

Several days passed without Bill getting in the trap. The chipmunks ran in and grabbed the apple core out, minions bringing the loot to their bigger roommate. I had almost given up hope. I thought it would never happen. Then I took the dogs out one rainy night before bed, and I knew. It was the most inopportune time. I was tired. Cranky. I wanted to crawl in bed and get some sleep. It was wet and miserable out, not the kind of weather to leave a living creature trapped out in the elements. Sure enough, Bill was in the cage.

I loaded the trap in the back of the Jeep, my husband and I standing over the seemingly fearless creature in the cage. Bill looked at me with sadness and regret in his eyes. The house destruction was a moment of weakness, he seemed to say, it wouldn’t happen again. He put his little hand through the wires of the cage, as if he were reaching for me, his eyes never leaving mine. My heart broke. But my mind was made up.

The guys at the farmer’s union told me to make sure I took him at least 10 miles away, preferably over a body of water, to prevent his return. So my husband and I spent an hour driving him way farther than that out to his new home, the shore of a huge pond deep in the woods of moose country. If the area could support moose, (and the deer and fox we passed in droves), then surely a groundhog’s needs could be met, too.

I opened the cage along the edge of the pond. Bill stepped out, turned around, and looked at me. He seemed to be asking me not to do it. He could change, he’d be a better friend, stay out of the garden and be less destructive. I shook my head no. He slowly walked off, pausing often to look back at me, making sure I didn’t have a last minute change of mind. As much as it hurt, I stood strong.

I spent days wracked with guilt. Would Bill be alright in his new home? Would he be safe? Would he be overcome with crippling depression at the rejection, unable to get out of his groundhog bed in the morning?

A week passed. The void Bill Murray left in my life was starting to shrink. The pain was starting to fade. I walked into the kitchen, where my husband was eating lunch. He looked at me a moment, then suggested that I look outside. There, out front, was a groundhog. Apparently, I had just missed seeing the little face peer inside. The body looked a little bigger, the tail was pretty ratty.

Could it be? Had Bill Murray hiked over twenty miles to return home?  All guilt I felt immediately vanished, replaced by fear. Maybe even a little anger. How would I ever manage to catch him again? What would he do in retribution? Throwing open the door, I went outside to confront my nemesis. The groundhog froze, looked at me with fear, and bolted. Never to return again.

Was it Bill Murray? I’ll never know for sure, but I’d like to think not. I’d like to think that Bill is stretched out, relaxing on a sunny pond bank, chewing on tender shoots and living the good life. I wish all the best for Bill. As long as he doesn’t come back.

2 thoughts on “Groundhogs, Gardens, and Guilt”