I just read a piece on why your story should have two narrators. Nowhere in the piece did it discuss anything about point-of-view, which seemed kind of strange to me, but I didn’t write it, so who am I to judge? While I can see the benefits of sharing multiple character’s points of view with readers, and actually do so rather frequently in my own writing, I also think care needs to be taken to ensure the reader knows whose thoughts they’re reading at all times. (We’ve probably all read books where the author shifts viewpoint so many times that it’s like being inside the head of an overachiever at a Dissociative Identity Disorder conference.)

All the above being said, I also think it’s important to consider the type of point-of-view you use in your writing. The first time I read a book written in first person, I found it oddly uncomfortable at first. “I” was doing so much! But in time I came to like it, and it seems to be gaining popularity. 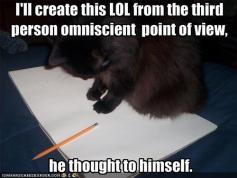 Third person limited seems to be the most commonly used form. It’s the good, old, safe, warm blanket of reading (or writing) from a character’s viewpoint without getting too intimate with the character too fast. We’re (readers) ‘watching’ more than ‘doing’. We know what the narrator wants us to know, little they don’t want us to know, and are left to draw our own conclusions.

Third person omniscient would seem an easy solution to the ‘at least two narrators’ article I read, except that, as I said above, special care needs to be taken so that readers know what thought is attributed to what character. I get very frustrated when, as a reader, I have to read a sentence or paragraph multiple times to try to figure out which character’s viewpoint it is. I get even more frustrated when I still can’t figure it out after multiple readings – sometimes the author just doesn’t let you know, and while I can understand that sometimes this is done as a literary device to aid the plot, more times than not it’s just carelessness.

Then there’s unreliable narrators . . . I won’t get started on that. I’ll just say, when done properly, I enjoy it very much.

What do you think? Do you think one point-of-view works better for different types of plots than others? Are you more comfortable writing (or reading) one type over the other? Have you noticed a trend in the point-of-view used that correlates to the amount of enjoyment or satisfaction you feel writing or reading? Does your work just instinctively choose one when you start writing, or do you try out different points-of-view until you find what works best for the piece? Inquiring minds want to know . . . 🙂