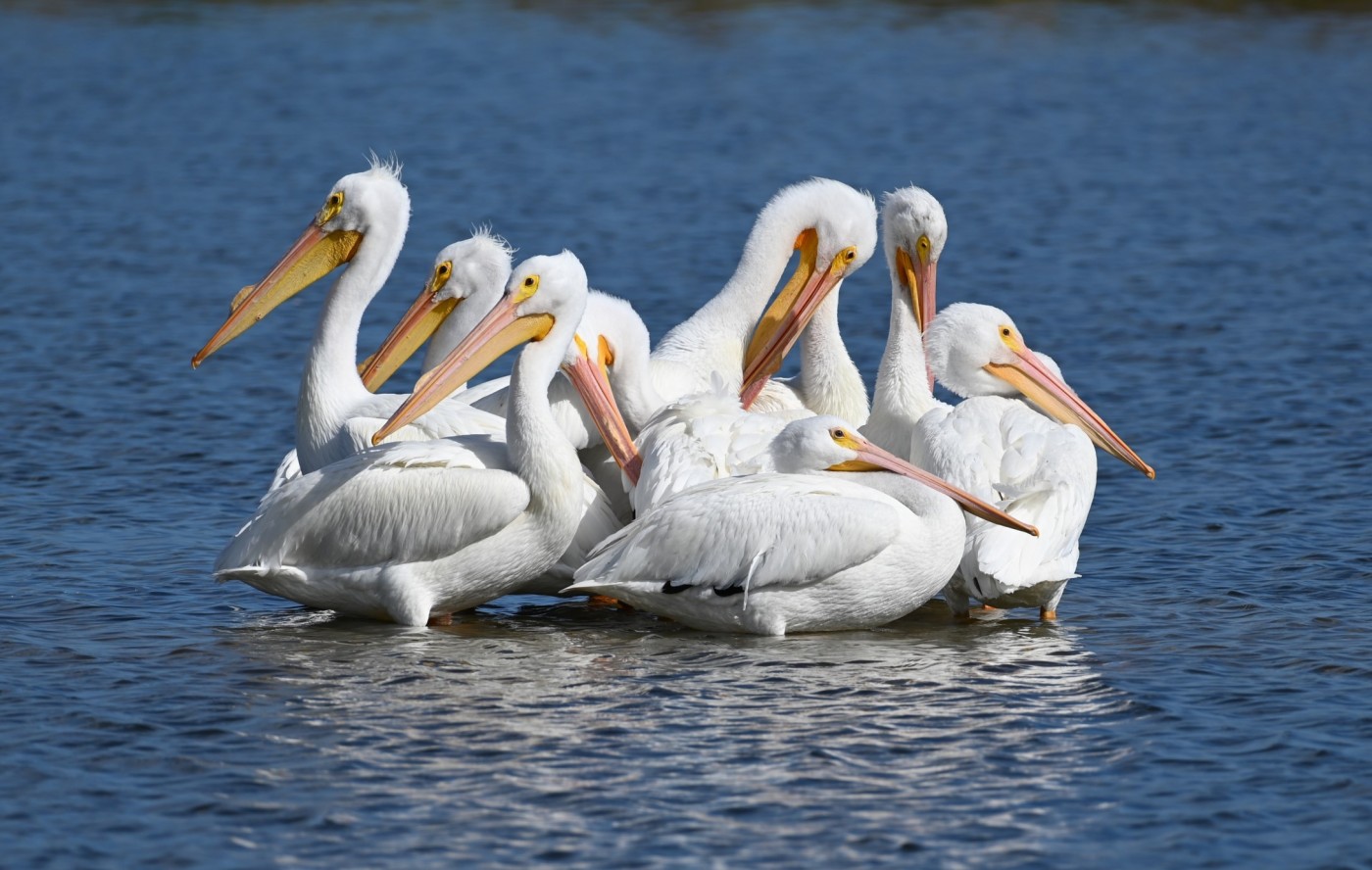 The problem is, all the places I know of where they hang out keep them well shielded from my camera lens, forcing me to shoot through thickets of mangroves and tangles of trees – that is until two weeks ago, when I happened to take a short cut to grab lunch when I had jury duty and discovered a flock of white pelicans in a pond surrounded by condos. I didn’t have my camera, or the time to stalk them, but I promised myself I’d return and get the pictures I so badly wanted.

Fast forward a week, and I set out early with my camera on the way to do some grocery shopping at a store slightly out of my way – but on a direct course leading to a pond full of white pelicans. I’m almost to the pelican pond, what should I see but a Crested Caracara right at the side of the road trying to pull a flattened opossum to a better dining spot.

I know where a nesting pair of these fierce looking birds live, but I got my camera at about the same time that the area opened up to air boaters who decided that buzzing the shore was good entertainment and the birds no longer hang out on the trail like they once did, which makes them another bird I’ve been trying to get a good picture of, but there was a curb and nowhere to pull over and I refuse to do squirrely moves while driving, so I decided to go to the pelican pond real quick and then find a place to park and hike back to the Crested Caracara.

Only – I drive the half-mile to the pond and the pelicans aren’t there. Bummer. So I turn around, find a park, and hike to where the Crested Caracara was. And it was gone, too, although the opossum it was hoping to snack on was still there. This is the type of thing that happens to me quite often, a situation that my husband says is specific to Shannons because they rush into things without thinking them through which I would disagree with (in this case) since I’d been thinking about this excursion for over a week and how was I supposed to know there’d be a bonus bird dangled before my camera lens, PLUS I did stick with my original plan which makes his point moot (again, in this case), but at least he agrees it sucks when this kind of thing happens, so we’re on the same page there.

By this time it’s nine in the morning and since it’s late February in Florida I’m already rather sweaty so I decided to keep walking for a bit along the road, hoping to spot the caracara somewhere else or at least get some exercise but mainly refusing to leave until I’ve captured something interesting with my camera.

And then I see it. The (rather new) high school. And in the pond beside it – a pond which was dug to provide fill dirt for the school and the condo building next to it because the whole area used to be wetland but is now one of the top 10 planned communities in the US and because of this there are manmade ponds every quarter mile or so to keep the whole place from flooding – there, in that pond, I see several white pelicans!

They were on the high school side, and since I didn’t think campus security would appreciate me trespassing for the sake of pictures (and no way would I ever want to return to high school, anyway), I hiked down to the pond on the condo side and used my zoom lens.

And this is a typical Shannon type adventure, where the best laid plans go awry, but out of sheer stubbornness and refusal to give up and maybe a bit of the luck of the Irish (I’m not sure if I’m Irish but my name is so I claim it!), things work out in their own not perfect but better than nothing way. AND, I didn’t even have to confront any giant alligators this time (although, of course, I did see some smaller ones).

7 thoughts on “Another Awry Adventure”