Check back next Tuesday for more writerly words of inspirations! 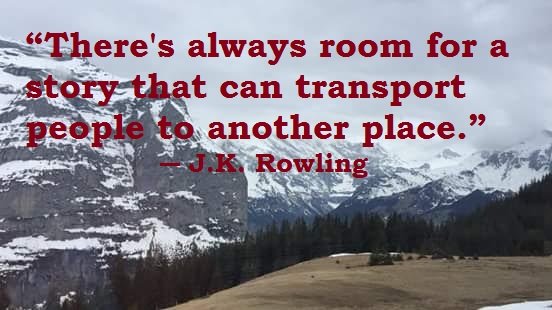 What can I say about this mystery published under the pen name Robert Galbraith, written by J.K. Rowling, the first author to ever become a billionaire from book sales alone? I liked it. Main character, Private Investigator Cormoran Strike, seems like an affable fellow. I like him, too. His sidekick, Robin the secretary from Temporary Solutions, is also very likable.

The writing, of course, is sharp. Twice in the book she describes a character as, “having the complexion the color of corned beef.” That’s one of my new favorite descriptions, one I know will come to mind the next time I’m forced to go to Walmart on a Sunday when everyone is loading up their shopping carts with beer and chips for football or NASCAR. The plot, if slightly predictable and secondhand, was entertaining. There were times when I doubted my initial suspect and was left guessing.

I liked this book. Not loved, but I did find it enjoyable. Why, then, did it take me almost a full two weeks to read it? Days went by when I looked at the book, then looked everywhere but at its pages. Until the last 1oo, maybe 150 pages, I didn’t feel drawn to the story. I wasn’t compelled to lose myself in its pages. At times, the book even felt like a chore I was avoiding.

But, again, I did like and enjoy the story, so perhaps the time it took me to read it has less to do with the book and more to do with me. It’s possible that my expectations were set so high that they were impossible to meet. It’s also possible that I was in a weird mood and would have had issues reading any book during the same time frame. Still, I’m only giving this one 4 stars, for several reasons. Mainly, one, my first suspect was the guilty party, and I believe Rowling has more imagination than to regurgitate a tired trope and two, I got the impression that what was supposed to impress the reader was not the plot but the Sherlock Holmes like deductions made by the PI, which, while impressive, are not enough. 4 stars.