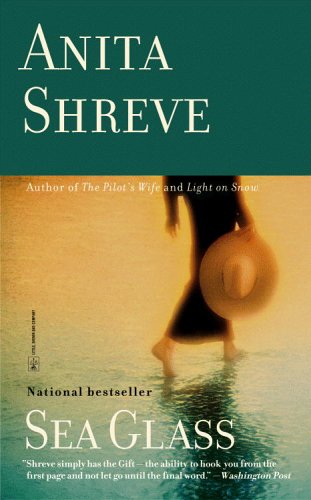 This book is told from the perspective of six different characters whose lives eventually intersect and become intertwined with each others’. Anita Shreve is a beautiful writer and her characters are vivid and well developed. The setting – New Hampshire in the late 1920s/early 1930s (during the Great Depression)- lends itself towards a plot rich with struggle and strife. However, if I’m perfectly honest, I found this book a bit disappointing.

I felt like I was always waiting for something to happen. Even when things did happen in the book, I was still waiting for the real story to begin, but it never did. I’ve said it before and I’ll say it again – I’ve been ruined by mainstream fiction with its suspense and drama and action. When I find myself reading contemporary literature, just another normal day in the life of everyday people, I’m left feeling underwhelmed and dissatisfied. This was a good book, the tale was certainly well told, but it left me wanting a bit more. 4 stars.

Last month, thanks to an awesome deal through Groupon, we went and explored Lost River Gorge and Boulder Caves in Woodstock, New Hampshire. This attraction features a series of over 1000 stairs leading you up, down, and through a glacial gorge notched into huge slabs of granite rock. Winding your way past a series of cascades, you can’t help but feel the weight of the passage of time upon the landscape. And while I wasn’t feeling the caves that day, (I proved myself enough at the Polar Caves in Rumney), there were a ton of tight, twisty little passages for spelunkers to explore. This is a fun excursion, easily lengthened by numerous hiking trails. While there, I highly recommend exploring the great towns of Woodstock and Lincoln, and taking in  the gorgeous views, especially if you find your way to the Kancamagus Highway.

We recently hiked North and South Twin Mountain, making us officially 50% done with the New Hampshire 4000 footers! We began the hike off Haystack road, approaching from the north. There were some crazy river crossings on this trail, including a scoot across a fallen log over a raging torrent of rushing water – perhaps approaching from this side is a better idea when there hasn’t been heavy rains in the area?

After what seemed like forever (but was really only 3.5 hours), we reached the overlook for North Twin. Although only 1.3 miles from the summit of South Twin, the distance looked long and daunting, especially since this hike was and in and out instead of a loop, which meant hiking over to South Twin, then back over to North before heading down. Basically hiking up – down – up – down – up – down. There’s no way your legs aren’t going to feel that

At 4902 feet, South Twin is the 8th highest of the 4000 footers (North is 12th). This hike was a challenge, but the views were incredible! The 11 mile hike took us just under 8 hours, which would have been shorter if my knee had been a little more agreeable on the way down. All in all, an awesome hike with breathtaking payoffs at the top. If you approach from the south, the AMC’s Galehead Hut is about a mile from the South summit, providing an alternative for those who don’t want to tackle the hike in a single day.

I first stumbled upon Sabbaday Falls while hiking the TriPyramid Mountains, but as the end stretch of a twelve mile hike that included two mountain summits over 4000 feet, I didn’t really have the energy left to fully appreciate the beauty of this site the way it deserved. I knew I’d be back.

Located in the White Mountain National Forest off the Kancamagus Highway in Albany, NH, it’s easy to see why Sabbaday Falls is one of the most popular waterfalls in New Hampshire.

Rushing water cuts a deep gorge through the mountain rock, falling, at its peak, for 45 feet. Lower down it gathers in shallow pools, cascades down the rock face and flows in a steady, winding stream, making this one of the most enjoyable walks around. It’s also quick, an easy grade, and wheelchair accessible, so

there’s no excuses not to stop the car and explore this natural wonder!

I could see snow in the distance on Mount Washington, but it had yet to stick in the valley, so I really didn’t expect to encounter much of the white stuff on our hike up Mount Garfield. Shortly into the hike, however, I realized that I was in for a surprise. Our boots crunched over a light dusting of snow. Then they sank into an inch of slush. Soon, we found ourselves marching through a winter wonderland, surrounded by ice frosted trees and snow banked trails.

At 4500 feet, Mount Garfield is the 17th highest of the New Hampshire 4000 footers in the White Mountains. The trail starts easy enough – for the first two of three miles, it’s like walking up a wheelchair ramp – a constant but not too steep incline. There are several river crossings which were quite easy to traverse, although I imagine that in late spring/early summer

when the water level has risen from the thaw that they may prove more difficult.

Once you stop hiking straight up and start winding your way around the switchbacks, the trail takes on that endless feeling where you expect to see the top come into

view around every corner, but it just doesn’t. The hike is in and out, five miles each way. Maybe it was the snow, but this was a VERY long five miles in. I’ve gotten pretty good at estimating how much ground we’ve crossed, but I was off by a good mile on this one. Just as I had

At the very end, as usual, it gets a bit steeper and requires climbing some rocks, but for the most part, this was an easy, if long hike, with no slides, scrambles, large expanses of bald rock to cling to or any other more challenging features to

conquer.The view was amazing, made all the more bewitching by the snow and ice. The summit was incredibly cold and windy, the kind of weather that claws at you, where your skin is whipped raw and you quickly lose feeling in your fingers and toes, so we snapped a few pictures and

It was too cold to stop and there was nowhere dry to sit, so lunch consisted of stuffing our pockets with food to eat while walking. With the short fall days, we were also pressed for time if we wanted to get off the mountain before nightfall. We did the ten mile hike in just under six hours.

This seemingly endless hike was definitely worth the views, and even though I succumbed to the sniffles over the next couple of days, it was one of my favorite hikes of the year. I highly recommend this mountain.

A chilly but sunny Saturday afternoon found us back at the Pudding Pond trailhead in North Conway, NH, only this time, instead of hiking around the pond, we were headed up to Peaked Mountain, one of the three summit trails that can be found in this section of the Green Hills Preserve.

At 1739 feet, Peaked Mountain isn’t the most challenging hike, but it is a rewarding one, with breathtaking views that can be reached in less than an hour, making this a great stop for a quick hike when you don’t have an entire day at your disposal. If you have a bit more time, you can add a trip over to Middle Mountain (which I haven’t hiked yet) to your itinerary.

The trail is lined by a series of small falls and is well sheltered from the sun. This was a great little hike that allowed for some fresh air and exercise while still allowing plenty of time for weekend errands.

With winter quickly approaching, we’ve been scouting out places to go snowshoeing in the area. When we moved here in March, there was still four feet of snow as far as the eye could see, the result of sno-mageddon 2015. Unfortunately, with all the extra tasks that come with buying a house, we didn’t get much exploring done then. So we’re making up for lost time now.

For some strange reason, a place by the name of Pudding Pond caught my attention. I can’t imagine why 😉

This is the trailhead for several nearby mountain paths, as well as a 1.7 mile loop around a huge pond with sparkling waters, a beaver dam, and gorgeous scenery. 1.7 miles might not seem like very long, but it’s the perfect length for that first hike out while you’re getting your snowshoe legs, and with all the offshoot trails, we can easily extend the length of our hike. With such a beautiful place to get outside, I (almost) can’t wait for winter!

If you’ve spent a lot of time looking at pictures of beautiful lakes with mountains in the background, chances are you’ve seen a picture of Lake Chocorua. The bald rock summit of Mount Chocorua can be seen in the distance from the shores of the lake. In the summer, it’s a popular spot to launch

a kayak or canoe. In the fall, it’s a serene spot to take a walk, surrounded by fall leaves shaking in the brisk air. It’s the perfect place to take pictures any time of year, with many award wining shots taken at sunrise and sunset. I couldn’t resist taking a few photos of my own on my cell phone. Located in Tamworth, NH, right off 16, it’s a stop you can’t miss if you’re in the area.

Highway. Located in Albany, New Hampshire, everywhere you look there

worthy view of sparkling water spilling over granite rocks, collecting
at the bottom into a pool that is packed with swimmers during the

summer months.  It’s a great place to stop for a picnic, complete with picnic tables and charcoal grills. The parking lot is on the right, about seven miles in from the Conway end of the Kanc, and is definitely worth the drive!

Covered bridges, like lighthouses, are one of those things that seem to have a strange kind of rustic charm that lures people in.

There must be a fascination about them, really, to cause such a fuss. Since

coffee cups, sweatshirts-you name it and I’ve seen a covered bridge on it. There’s even one on a back road in the town I live in, a single laned covered bridge that draws tourists into traffic jams like bees to honey. Apparently, in the scheme of things to see in New England, they’re a pretty big deal.

So imagine my surprise when we wandered upon one out in the middle of nowhere while taking a sideroad to a hiking trail off the Kancamagus Highway. It was the first nippy day of fall, and instead of hiding inside under a blanket next to the pellet stove, we went for a hike to explore new places. And this hidden treasure was our reward 🙂