Barnes has done it again! Another smart, twisty, addictive mystery that I found impossible to put down!

In the second book of the Inheritance Games series, our plucky heroine finds herself drawn deeper into the mystery of why a billionaire chose her to inherit his fortune over his own family, and the question of parentage comes into play. The riddles, the clues, and the seemingly impossible trail of breadcrumbs all lead the MC to confront the uncomfortable secrets from her past and truths about her present.

If you haven’t read this author and you enjoy YA thrillers and mysteries, do yourself a favor and check out this and her Naturals series!

Intrigue, riches, and romance abound in this thrilling sequel to the New York Times bestselling The Inheritance Games perfect for fans of Karen McManus and Holly Jackson.

The Inheritance Games ended with a bombshell, and now heiress Avery Grambs has to pick up the pieces and find the man who might hold the answers to all of her questions – including why Tobias Hawthorne left his entire fortune to Avery, a virtual stranger, rather than to his own daughters or grandsons.

Thanks to a DNA test, Avery knows that she’s not a Hawthorne by blood, but clues pile up hinting at a deeper connection to the family than she had ever imagined. As the mystery grows and the plot thickens, Grayson and Jameson, the enigmatic and magnetic Hawthorne grandsons, continue to pull Avery in different directions. And there are threats lurking around every corner, as adversaries emerge who will stop at nothing to see Avery out of the picture – by any means necessary. 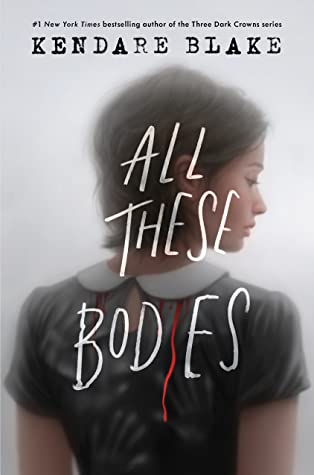 A serial killer’s rampage keeps the nation breathless as they follow the news in 1958 America. For an aspiring young journalist, he expects the papers to be as close as he’ll get to the case from his tiny Midwest nowhere town. Right? Wrong.

I had such high hopes for this one that I can’t help but feel a little disappointed. On the one hand, the plot was compelling, the characters were well developed, the writing kept me drawn in and hooked. On the other, this is the author of “Anna Dressed In Blood.” I expected my emotions to run the full gamut of the spectrum while my toes curled and I debated whether or not I was ready to turn the page. Sigh. It would be unfair not to say this was a good read, because it was, it just wasn’t what I wanted it to be, which is unfair to everyone (book, author, and reader). I enjoyed it. But it’s no Anna.

From Goodreads: Sixteen bloodless bodies. Two teenagers. One impossible explanation. In this edge-of-your-seat mystery from #1 New York Times bestselling author Kendare Blake, the truth is as hard to believe as it is to find.

Summer 1958. A gruesome killer plagues the Midwest, leaving behind a trail of bodies completely drained of blood.

Michael Jensen, an aspiring journalist whose father happens to be the town sheriff, never imagined that the Bloodless Murders would come to his backyard. Not until the night the Carlson family was found murdered in their home. Marie Catherine Hale, a diminutive fifteen-year-old, was discovered at the scene—covered in blood. She is the sole suspect in custody.
Michael didn’t think that he would be part of the investigation, but he is pulled in when Marie decides that he is the only one she will confess to. As Marie recounts her version of the story, it falls to Michael to find the truth: What really happened the night that the Carlsons were killed? And how did one girl wind up in the middle of all these bodies?

Can you hear that? It’s the sound of me rubbing my hands together after finishing a satisfying, if unbelievable, tall tale about a Teen Killers Club! Best of all, I smell a sequel (please let there be a sequel)!

In this one, the MC is in jail for her best friend’s murder. She doesn’t remember killing her friend, but her friend wasn’t always so nice to her and she blacked out, so . . . when she gets an offer from a shady government agency to free her from prison if she agrees to go to their camp, she takes it. Even if it lands her in the middle of a pot of hot teenage killers who DO remember committing their crimes. Not just that, but they’ve all tested psychologically as the worst of the worst! EEK! Now be a good camper, turn out the lights and go to sleep. Fast paced and a lot of fun!

Framed for the murder of her best friend, a young girl joins a super-secret society of teenage assassins to avoid a lifetime behind bars–and discovers her own true self–in this mesmerizing debut novel.

Seventeen-year-old Signal Deere has raised eyebrows for years as an unhappy Goth misfit from the trailer park. When she’s convicted of her best friend Rose’s brutal murder, she’s designated a Class A–the most dangerous and manipulative criminal profile. To avoid prison, Signal signs on for a secret program for 18-and-under Class As and is whisked off to an abandoned sleep-away camp, where she and seven bunkmates will train as assassins. Yet even in the Teen Killers Club, Signal doesn’t fit in. She’s squeamish around blood. She’s kind and empathetic. And her optimistic attitude is threatening to turn a group of ragtag maniacs into a team of close-knit friends. Maybe that’s because Signal’s not really a killer. She was framed for Rose’s murder and only joined the program to escape, track down Rose’s real killer, and clear her name. But Signal never planned on the sinister technologies that keep the campers confined. She never planned on the mysterious man in the woods determined to pick them off one by one. And she certainly never planned on falling in love. Signal’s strategy is coming apart at the seams as the true killer prepares to strike again in Teen Killers Club.