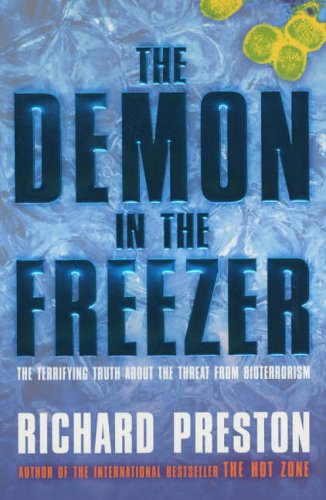 Talk about horror – the thought of biological warfare is a truly terrifying idea. Richard Preston does a wonderful job of breaking down both the science and the facts, reconstructing scenes from the past to immerse the reader in the climate in which events occurred and decisions were made.

It’s impressive that doctors were able to eradicate a worldwide disease as deadly as smallpox. Unfortunately, in today’s politically volatile climate, with a modern population that has no immunity to the disease, very few vaccines on hand, and so many samples of the disease remaining in unfriendly hands around the world, it seems that this ‘dead’ disease is still very much of a threat. Richard Preston reveals the known details of this risk in an unflinching manner.

Although it is harder to sleep at night having read this book, I’m glad that I did so. With the startling realization that, due to the eradication in the 1970s, people my generation and younger probably wouldn’t recognize a smallpox rash if we saw one, I googled images to familiarize myself with what it may look like. It’s not pretty. I’ve chosen to not include images here, where they could assault the eyes of the unsuspecting, but I would suggest that readers who are interested take a look for themselves. Education is a key tool for survival.